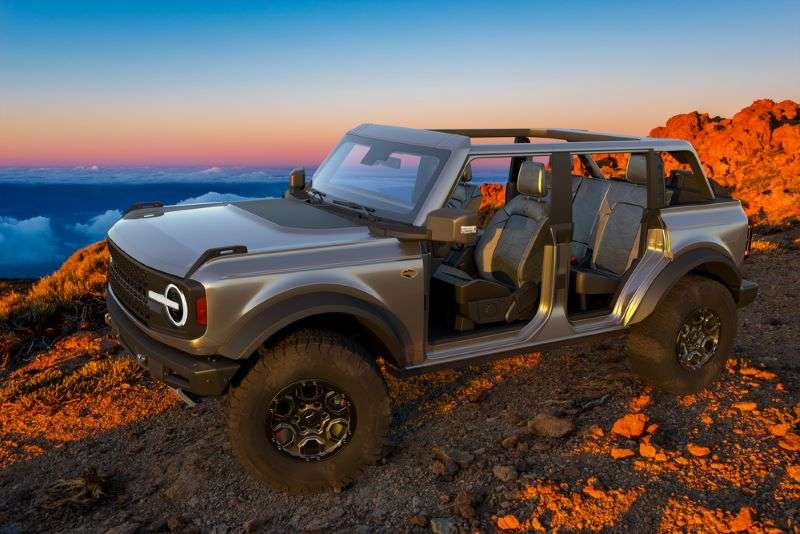 The Bronco is back!  It is modern and is very competitive on the trail while also looking great!  You can take the top off and let the sunshine in!  But who are the competitors of the Ford Bronco?

After you are done with this article check out the Ford Bronco youtube review at the bottom of this article for more info on how it drives!

For now, let’s take a look at some of the other vehicles that will compete for TRAIL DOMINANCE! sorry too dramatic.

The Jeep Wrangler is undoubtedly the #1 competitor of the Ford Bronco.  The Wrangler has been around since its conception during World War II!

The first Wrangler available to the public was released in 1986 and has had market control of trail vehicles ever since.  There have been vehicles that have come to try to take its thrown but have never succeeded.

The Jeep is the top competitor of the Ford Bronco.  I think this is great that the Wrangler has a competitor. I believe that because there was no competition the Wrangler could avoid things like improving its tech.  If you are selling a lot year after year why put money into R&D if you don’t have to?   Hopefully, they both push each other to make the best product they can be. Check out the tech in the Ford Bronco I bet you won’t be disappointed.

The 4runner definitely has a great off-roading history in the US and is a competitor for the foreseeable future.  But the 4runner is starting to blur the lines between being great on the trail and being a safe grocery getter.

Toyota has a bit of a history of transforming great off-roading vehicles into parking lot heroes.  Look at the Toyota Land Cruiser.  It was a great off-road vehicle but now it is relegated to the soccer fields dirt parking lot.

But I believe that the 4runner should still be able to hit the trail for some time because they are still big on the trails.  One of the downsides of them compared to the Bronco is the top does not come off!

The FJ cruiser had a great run between 2006 and 2014.  Highly trail-capable and good to go right of the dealer’s lot.  It is just too bad they don’t make them anymore.

I had one for two years and it was a blast to take out on the trails.  I even emailed them when I came back into the country to ask if there were going to start selling them again.  They actually responded and said that the FJ cruiser was only to be a short-lived project.

So, it’s not a competitor but you will see FJ Cruiser loyalists riding around the trails everywhere and I am sure they are going to be a cool collectible in the future.  For one they are holding their value well.  Check out this article on its appreciation:  Hagerty.com

Another short-lived project but this time by Nissan.  The Xterra only lived from 2005 to 2015.  Another could be a competitor but sadly not.

With a very unique look, this SUV had a great following and was decent on the trail.  It had the spare tire underneath the vehicle but many off-roadies mounted them on top to be able to wheel them harder.

It would be great to see this one return to the trails!

I always want to hate Hummers but for whatever reason, I always end up liking them.  Now hummer has come out with a new Electric vehicle that boasts around 250 to 300 mile range on its electric battery.

The biggest question is, will we even see these on the trail?  I know the older Hummers were never on the trails I roamed.  There could be three reasons why they will not be:

I say this is not a competitor! But the future is bright for electric offroading vehicles!

This vehicle is for the rich and famous, but it does seem to offer some of the best specs to go along with the price tag.

From reviews, it does appear to be a great off-roading vehicle as it comes with three locking diffs, 9 inches of clearance, and a low gear for the tough stuff.

With that price tag, I am going to say not a competitor!

As of right now, there are only two main competitors that we see for the Ford Bronco.  The almighty Jeep Wrangler and the Toyota 4runner.

If you are deciding between the three for the trails I think it’s easy enough to say that you can remove the 4runner from the list just because the top does not come off.  After that, it all comes down to specs and what you like.  Check them out here on Car and Driver:

You can also check out this review of the Ford Bronco on youtube: